The deer is one of those animals in feng shui that quietly goes about it own business while most of the attention and adulation goes to the more popular symbols like dragons, phoenix and tiger.

While there is a distinct difference between deers and goats, some people still knowingly equate the two as being similar in symbolism. The same can be said with antelopes, moose and yaks.

The deer is known for it’s speed, light-footedness, endurance and a long lifespan.

The last point is still up to debate as while deers can often live to over 20 years, that is a drop in the ocean when we compare that to tortoises and macaws.

It is probably due to this confusion that the deer is not as loved by the masses as birds and fishes like eagles and arowanas.

Whatever the case, the deer is a known symbol representing aspects of longevity in feng shui.

Legend of the deer

Legend has it that there were 3 variants of the longevity deer. The are of 3 colors of gray, white and black. Having lifespans of 1,000 years, 1,500 years and 2,000 years respectively.

The white deer in particular, was believed to make an appearance during periods of peace and prosperity.

The deer features in many traditional folklore, albeit in small roles.

The most prominent of which is it’s association with Shou, the god of longevity who is one of the 3 member of Sanxing, or the Fu Lu Shou.

Another story is about Zhou Yan Zi in a classic tale of filial piety who carries a deer skin on his back so as to get close to packs of deers to milk them to feed his ailing father.

Then there is the story of Jiang Zi Ya. A hero who prefers mounting deers over horses.

However, no matter how engaging these stories are, the deer is almost always depicted to accompany Shou when used in feng shui symbolism.

There’s also one myth that involved Zhang Guo Lao of the 8 immortals.

It’s about Emperor Xuan Zhong of the Tang dynasty who caught a huge deer when hunting game. He decided to consume it in a big feast and invited Zhang. When enjoying the hearty meal, Zhang recognized the venison as belonging to the longevity deer which lives for a thousand years. He then told the tale of emperor Wu Di from the Han dynasty (over 800 years before) who trapped the longevity deer and let it go after securing a copper tag with his imprint on it to one of it’s antlers. Emperor Xuan Zhong then asked for the head of the deer to inspect it and was stunned to learn that the copper tag was still there.

Thus, is it generally known as a longevity symbol even though it also has wealth and prosperity connotations to it.

The chinese word for deer is also a homonym for lu, which means good income.

When depicted in paintings or artwork with people in robes worn by government officials, is signifies a wish for promotions in civil service.

Then there is also the painting of a hundred deers which mean being blessed with abundance.

How the feng shui deer is used

Because of it’s combination symbolism of longevity and wealth, the deer makes a great gift for those who are grinding out their careers for fame and money.

They are especially respectful gifts to government officials or people in high authority as it represents respectful wishes of success and wealth.

Paintings of the deer can also be an energizer for quick thinking.

It must be noted that deers, especially large ones, can be territorial and moody at times.

In fact, deer attacks on humans are common. They often do this in rearing positions or by stomping.

So the best pictures or paintings of deers should be those that depict them in a peaceful mood either while grazing or relaxing.

Where they can be placed are the wealth or health corners of the house.

Figurines sometimes have them standing amongst gold ingots and coins. Those are undoubted meant for enhancing wealth luck.

When portrayed with Shou, they are meant for invigorating longevity and placement should be in the health corners like the yien nian location in 8 mansions feng shui.

They can also be place in sectors of the house where there resides a favorable flying mountain star.

In feng shui paintings, especially those of scenery with mountains and rivers, there can often times be 5 deers playing about.

This has significant symbolism to the Chinese in terms of calling for wealth luck.

Because the deer is written as 鹿 in Mandarin and pronounced as lu, it sounds the same as the word 路 which means road.

Therefore 5 deers is a word play that symbolizes the 5 wealth gods that bring money luck.

Above all else, it is generally agreed that the deer is used in feng shui more for health luck than wealth luck.

If this article has helped you, please consider making a donation in Dogecoin. Any amount is appreciated :D Click here for address

Get exclusive feng shui insights that you would not find anywhere else.
Ask A Question Amazon Manifestation Fengshui Bazi Symbols
New
7 Types Of Plants That Repel Evil ForcesSymbolism Of The Distinctive Halberd Weapon7 Odd Color Combinations That Can Actually Be Auspicious5 Simple Ways To Use Crystal Balls For Feng ShuiThe Meanings Behind Double Fish SymbolHow To Create A Feng Shui Home Office Setup

How To Use The Gourd To Dispel Poison Arrows

The Rhinoceros As A Powerful Symbol Of Protection Against Enemies 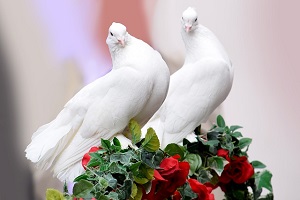 Why Doves Is A Symbol Of Relationship Longevity

7 Odd Color Combinations That Can Actually Be Auspicious

The Meanings Behind Double Fish Symbol

Sending Your Wishes To The Heavens For Fulfillment

How To Create A Feng Shui Home Office Setup

What A Pair Of Shoes Symbolize

The Quail Bird In Chinese Culture And Symbolism

When A House’s Feng Shui Is Bad For You