The term “money plant” is often used in conversations about keeping and caring for houseplants.

But people don’t always refer to the same plant that they know as the money plant.

This is because there are actually a few plants in horticulture that has been marketed and labeled with that attention-grabbing nickname.

Some have this name tagged to it in culture, some have features that are indirectly associated with wealth, and some even don’t appear to have anything to do with… anything!

So what are your friends actually referring to?

It is probably safe to say that the pachira aquatica is recognized in various parts of the world as the money tree.

The plant is actually coaxed to grow this way by expert cultivators who have practiced doing it for years.

The tree is usually grown at a small size as a houseplant. But can be allowed to grow to quite a considerable size if you allow it to.

They require minimum maintenance and therefore, make the perfect indoor tree plant to have at home.

The golden pothos is actually a very common house plant in various parts of Asia.

They come with various pet names like devil’s ivy and silver vine creeper among others.

Their specialty is the ability of it’s vines to climb up any structure, totally consuming it.

This is why they are a nightmare for other plants to share a territory in.

It is a species that has such a thirst for life that a single snapped stem can be left in water, and roots will start to grow within a matter of days.

It’s claim to the title of money plant originates from it’s huge green leaves that are said to remind one of the dollar bill.

The jade plant also lay claim to the good luck money plant moniker mainly because of it’s leaves like the pothos.

Only this time, it’s not that they have broad luxurious leaves. But their leaves are thick and succulent with a shade of green that reminds on of the jade gemstone.

Hold a leaf between your thumb and index finger and you’d feel it for yourself.

As jade has historically been a symbol of wealth and wisdom, it is often placed in homes and business premises to call on wealth luck.

The best part is that they can be pretty small sized. Making them cute and easily manageable.

Also known as crassula, it’s one of the favorites among people for desktop plants that would only take up minimum space.

This is an easy one to add onto this list. And you might be able to guess why.

It’s scientific name is pilea peperomioides, and also goes by a string of aliases such as pancake plant and mirror glass.

The Chinese money plant is so named because it’s leaves are round in shape, resembling coins.

So “money” metaphorically grows out of the potted plant.

While it is not known to be a difficult plant to maintain, it is not often seen in the wild.

Leading researchers to speculate that this species of plants are picky with the surrounding environment where they can thrive. 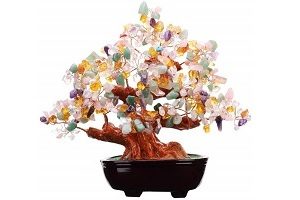 Gem trees are artificial plants that are usually shaped like a bonsai, made of resin, and filled with gemstones as “leaves”.

Sometimes called the wishing tree, they can be quite pricey depending on the types and grades of crystals used.

It’s easy to see why they have been given the nick name.

High-end gem trees can be filled with premium grade gemstones.

The idea of the gem tree is to combine the form of a lucky money plant and the power of crystals to bring wealth luck for an owner.

They are best placed in wealth locations.

The Symbolism And Placement Of Elephants In Feng Shui

The Osmanthus Flower Is A Symbol Of Nobility And Value

Is The Snake Plant Good Or Bad Feng Shui?

How To Design A Wealth Bowl For Feng Shui Placement

How Citrine Crystals Are Used In Feng Shui

5 Best Books On Chinese Astrology To Forecast The Future

Like what you've read?
Feng Shui Insights
The really good stuff is in our newsletters.
Also receive alerts to critical energy changes.

Get feng shui insights that clients are willing to pay for.
Unique information that you would not find anywhere else.